Pamphlets, brochures, and tour guides are educational and free mementos of a visit to an attraction, yet most people dispose of them almost as soon as they finish their visits. Sure, in the Internet Age, where you can find better and more up-to-date information online, holding onto old tourist guides and brochures hardly makes sense anymore, except perhaps in order to laugh at the now-dated clothing and hair styles of the people depicted therein; nevertheless, the MoMI's mandate to collect and preserve these disposable artefacts of the past means that at least some of these guides will be retained for posterity in our collection. Enjoy.


Below, a tour guide distributed to visitors aboard HMCS Haida in the 1990s. The Haida is a Tribal-class destroyer commissioned into the Royal Canadian Navy (RCN) on 30 August 1943. The ship served in the Second World War and the Korean War and gained fame as the most decorated ship in the RCN, a record she retains to this day. Haida was decommissioned and turned into a museum in Toronto in 1963. In 1970, the Government of Ontario acquired the ship and towed it to the newly-opened Ontario Place theme park near Toronto's Exhibition Place. Transferred to the Government of Canada in 2002, Haida was moved to Hamilton, Ontario and reopened as a tourist attraction in 2003.

The tour guide given to visitors aboard HMCS Haida during the period c.2000-2002. 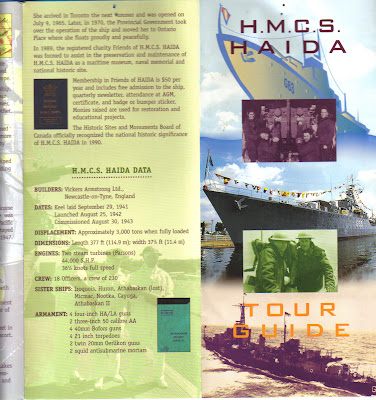 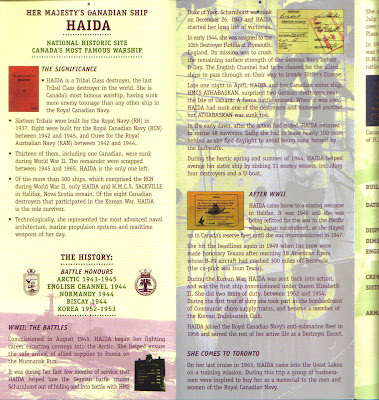 The tour guide distributed aboard HMCS Haida after its reopening in Hamilton, Ontario in 2003.

A tour guide handed out to visitors aboard HMCS Goose Bay during a port call in Toronto in the early 2000s. Goose Bay is a 970-ton Kingston-class maritime coastal defence vessel (MCDV), commissioned into the Canadian Navy in 1998.

A tour guide given to visitors aboard HMCS Toronto, a City-class frigate, during a port call in Toronto c. 1997-1998. The Toronto is a 4,795-ton vessel equipped with a 57mm gun, Mk 46 torpedoes, Harpoon and Sea Sparrow missiles, a 20mm close-in weapons system, .50 calibre machine guns, and a Sea King maritime helicopter. She was commissioned into the Canadian Navy in 1993.

A tour guide for Patriot's Point Naval and Maritime Museum, located in Mount Pleasant, North Carolina, USA. This tour guide dates from the mid-1990s. At the time of the printing of this tour guide, the museum featured the aircraft carrier USS Yorktown, the destroyer USS Laffey, the submarine USS Clamagore, and the Coast Guard cutter USCG Ingham.

The tour guide from the USS Arizona Memorial in Hawaii, obtained in the early 2000s:

A pamphlet for the Imperial War Museum: Duxford, home of the IWM's aerospace collection:


A tour guide for HMS Warrior, one of the attractions at the Portsmouth Historic Dockyard, Portsmouth, UK:


A tour guide from HMS Victory, another of the attractions at the Portsmouth Historic Dockyard, Portsmouth, UK:

A pamphlet for the Bovington Tank Museum in Bovington, Dorset, UK:

A pamphlet for the Toronto Aerospace Museum, obtained in 2006:

A tour guide from Canada's National Aviation Museum in Ottawa, Ontario, acquired sometime in the early- to mid-1990s:

A newer version of the tour guide (c. 2990) provided to visitors at the Canada Aviation Museum in Ottawa, Ontario:


A tour guide (c. mid-1990s) from the Buffalo and Erie County Naval and Servicemens' Park, home to the guided missile cruiser USS Little Rock, the destroyer USS The Sullivans, and the submarine USS Croaker. The museum opened in Buffalo, New York, USA on 4 July 1977:

A pamphlet for the Canadian Warplane Heritage Museum, located in Hamilton, Ontario, Canada. A unique feature of the museum is the airworthiness of all of the aircraft in its collection:

A tour guide (c. 2000) for the Intrepid Sea-Air-Space Museum in New York City, USA. The museum, which opened in 1982, houses the aircraft carrier USS Intrepid, the submarine USS Growler, a Concorde supersonic airliner, and a Lockheed A-12 supersonic reconnaissance aircraft:

Another pamphlet for the Intrepid Sea-Air-Space Museum:

A tourist guide for the Halifax Citadel, the city's foremost tourist attraction. This item was acquired during a trip to Halifax in June-July 2009:

Below: A National Park Service guide to the American Civil War Battle of Antietam, fought between Confederate General Robert E. Lee's Army of Northern Virginia and Union General George B. McClellan's Army of the Potomac, near Sharpsburg, Maryland on 17 September 1862.  Antietam is known as the bloodiest day of the Civil War due to the combined 22,717 casualties (dead, wounded, missing) suffered by both sides. 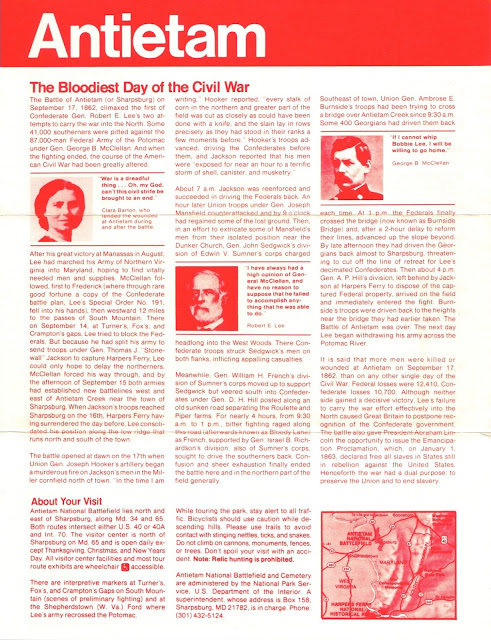 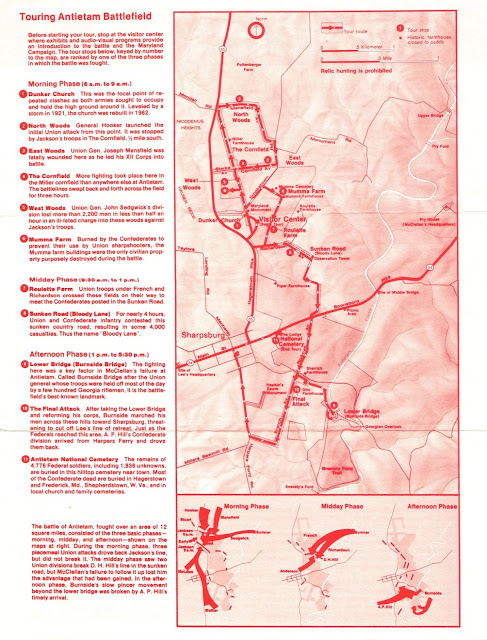