Having seen a reference to the preservation of the former Holland-America Line ocean liner/cruise ship S.S. Rotterdam in a book, your MoMI curator used the opportunity of a business trip to Brussels to take the short 1 hour 39 minute direct train to the Dutch city of Rotterdam to visit this remarkable ship.  Now run by Dutch company WestCord Hotels, which also owns the Hotel New York housed in the former headquarters of the Holland-America Line, S.S. Rotterdam features restaurants, bars, shopping, and meeting rooms, in addition to the refitted cabins now used as hotel rooms.  The centrepiece of the redeveloped Katendrecht district jutting into the Nieuwe Maas (New Meuse) river, the S.S. Rotterdam now serves as a popular entertainment and conference venue in its namesake port.

Ordered by the Nederlandsche-Amerikaansche Stoomvaart Maatschappij (Dutch-American Steamship Company, or Holland-America Line) on 27 October 1955, the keel of the company's fifth ship to be named Rotterdam was laid on 14 December 1956 at the Rotterdamsche Droogdok Maatschappij (Rotterdam Dry Dock Company).  Built at a cost of US$30 million (US$255.9 million in 2018 dollars), S.S. Rotterdam was the largest passenger liner ever built in the Netherlands and was launched on 13 September 1958 by Her Majesty Queen Juliana of the Netherlands in a ceremony watched by tens of thousands of proud Dutch citizens.  Following sea trials in July and August 1959, the ship was formally handed over to Holland-America Line and departed on her maiden voyage to New York on 3 September 1959, with then-Crown Princess Beatrix of the Netherlands aboard as guest of honour.

As built, the Rotterdam weighed 38,645 gross tons and measured 748 feet (228 metres) long, 94.1 feet (28.71 metres) wide, and 201.87 feet (61.53 metres) high from the keel to the top of the radar mast, with a draught of 29.53 feet (9 metres).  The ship was originally designed to carry a maximum of 1,784 passengers (647 First Class, 1,137 Tourist Class), along with 776 officers and crew; however, a 1977 refit reduced the passenger capacity to 1,144 to provide a more comfortable experience for cruise passengers.  The Rotterdam's 10 decks served as showcases for the Netherlands' finest artisans: the Holland-America Line's Coordinating Interior Architect, Han van Tienhoven, commissioned a wide range of mosaics, reliefs, wall paintings, carpets, and statues to be installed in various parts of the ship, making it a veritable museum of applied Dutch art.

Marketed using the slogan 'Tomorrow's ship...today!', S.S. Rotterdam employed a number of design concepts which were well ahead of contemporary thinking in the 1950s.  Most apparent was the positioning of the ship's machinery and funnels, located two-thirds aft on the ship instead of at the traditional midships location, as well as the design of the funnels themselves.  Other innovations included air conditioning throughout the ship with individual cabin controls, as well as a two-class horizontal layout with an ingenious double staircase and sliding panels that allowed the S.S. Rotterdam to be easily converted between the two-class configuration used for transatlantic voyages and the single class configuration required for cruising.  Details on these innovations are contained in the photo captions below.

The Rotterdam served the Holland-America Line for 37 years, first as a transatlantic liner between Rotterdam and New York until 1968 and then as a cruise ship, including for several round-the-world cruises, until 1997.  Following the completion of her gala finale cruise on 30 September 1997, the ship was sold to Premier Cruises and subsequently renamed S.S. Rembrandt.  Based out of Port Canaveral, Florida, Rembrandt continued to sail as a cruise ship until the bankruptcy of Premier Cruises in September 2000 forced her retirement after a total of 41 years in service.  Laid up in the Bahamas until 2003, the ship was purchased by the Rotterdam Dry Dock Company and, in 2004, was towed to Gibraltar for asbestos encapsulation/removal.  In 2005, the ship was moved to Cadiz, Spain for hull repainting, and finally to Poland and Germany for full restoration work.  Following this work, the re-named S.S. Rotterdam was towed to its namesake port, arriving on 8 August 2008.  On 15 February 2010, S.S. Rotterdam opened to the public.  In 2013, the ship was acquired by WestCord Hotels.

Below: The front and reverse sides of 'The New Ocean Post', a weekly newsletter modelled after 'The Ocean Post' at-sea newsletter once provided to transatlantic and cruise passengers aboard S.S. Rotterdam.  The newsletter provides information on the ship, the weather, the city of Rotterdam, and dining and entertainment options on board. 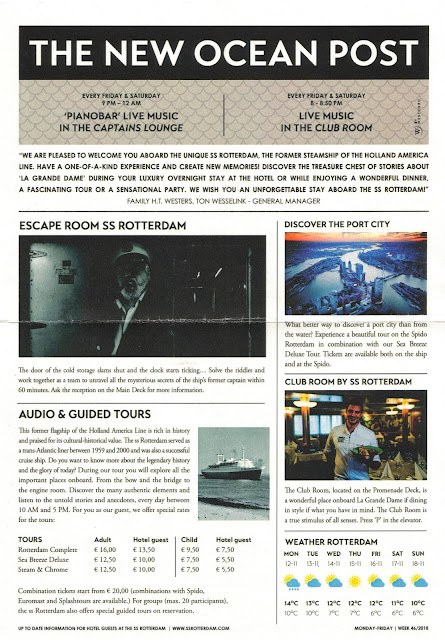 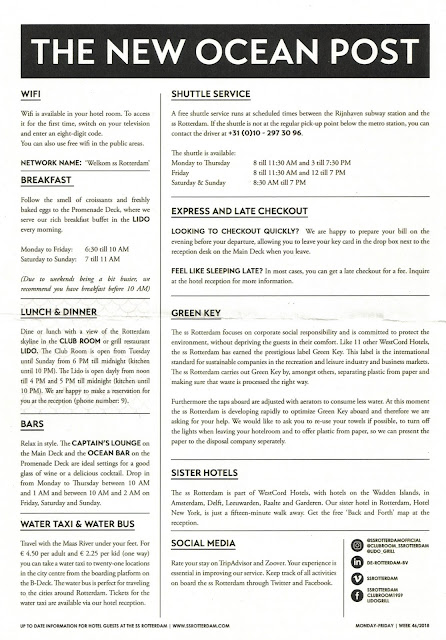 Below: The pocket-sized ship's deck plan provided at Reception to guests staying aboard S.S. Rotterdam and showing the location of the restaurants, bars, shops, meeting rooms, and main public rooms on the ship. 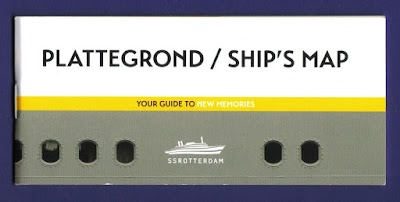 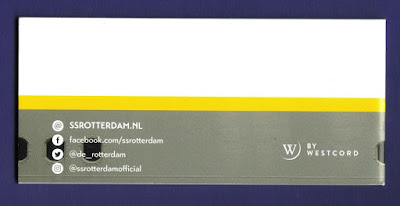