Cruising is one of the most popular vacation choices for people these days. Since the American television show 'The Love Boat' (1977-1986), the cruise market has been a boom industry. With more and more passengers demanding ever more modern and convenient ships, cruise companies have retired old ships and bought dozens of ultra-new ships in the past two decades alone.

The artefacts below come from a variety of cruises taken by MoMI donors, ranging from a voyage on an older ship long since retired and scrapped to ones taken on some of the most modern ships in the industry.

Below: The S.S. Amerikanis, launched in 1952 as the Kenya Castle. Purchased by Chandris Cruises in 1967, the ship was refitted as a passenger liner with a capacity of 920, and was the first passenger ship to feature a television in every cabin. After sailing the transatlantic route and the New York-Caribbean-Bermuda route for over 12 years, Amerikanis was leased to Costa Cruises between 1980 and 1984. Returning to Chandris Cruises in 1984, the ship plied the Caribbean until 1996 when she was laid up and, in 2001, scrapped at Alang, India. The documents below were acquired during a Caribbean cruise aboard the Amerikanis in 1992. 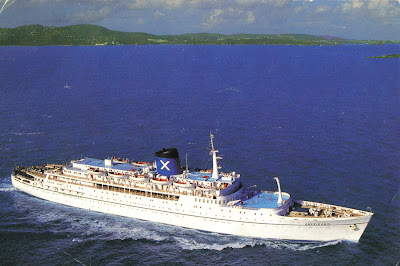 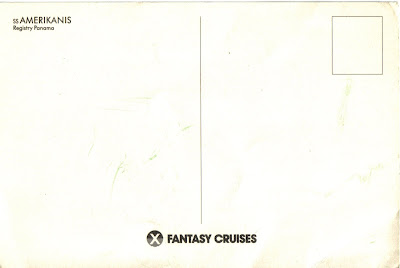 Below: The deck plan of the S.S. Amerikanis: 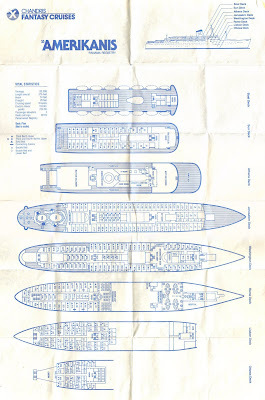 The following artefacts come from a 2000-2001 Caribbean cruise aboard the M/V Norwegian Sky. The Norwegian Sky was originally ordered in 1993 by Costa Cruises as the Costa Olympia. Shipyard financial difficulties in 1996 resulted in work being suspended with the ship only 35% complete. After being laid up, Norwegian Cruise Line (NCL) bought the uncompleted hull in December 1997. With major modifications demanded by NCL, work resumed and the ship was completed in 1999. Following sea trials, NCL took delivery of the new ship on 28 June 1999. After sailing on the Hawaiian route as part of NCL's America division under the name Pride of Aloha from October 2004 to May 2008, the ship was rechristened Norwegian Sky and returned to Caribbean sailings. 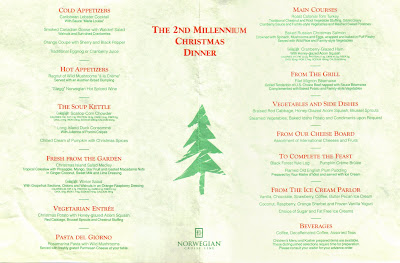 A convenient, pocket-sized deck plan of the M/V Norwegian Sky:

The reverse side of the deck plan, containing technical specifications and a photo of the ship:

The front side of the electronic keycard used to access cabins aboard M/V Norwegian Sky:

The reverse side of the above keycard:


Below: The front side of a postcard from the M/S Norwegian Majesty.  Built by the Kvaerner Masa-Yards in Finland, the $229 million ship was launched on 15 November 1991 and entered service with Majesty Cruise Line as Royal Majesty on 2 July 1992.  Christened in New York City on 29 July 1992 by Liza Minnelli, the ship was sold to Norwegian Cruise Line in 1997 following the dissolution of Majesty Cruise Line.  The ship was sold to Louis Cruise Lines in April 2008 and, following a charter back to Norwegian Cruise Line until October 2009, was  renamed Louis Majesty.  Since May 2012, the vessel has been chartered to Thomson Cruises, operating under the name Thomson Majesty: 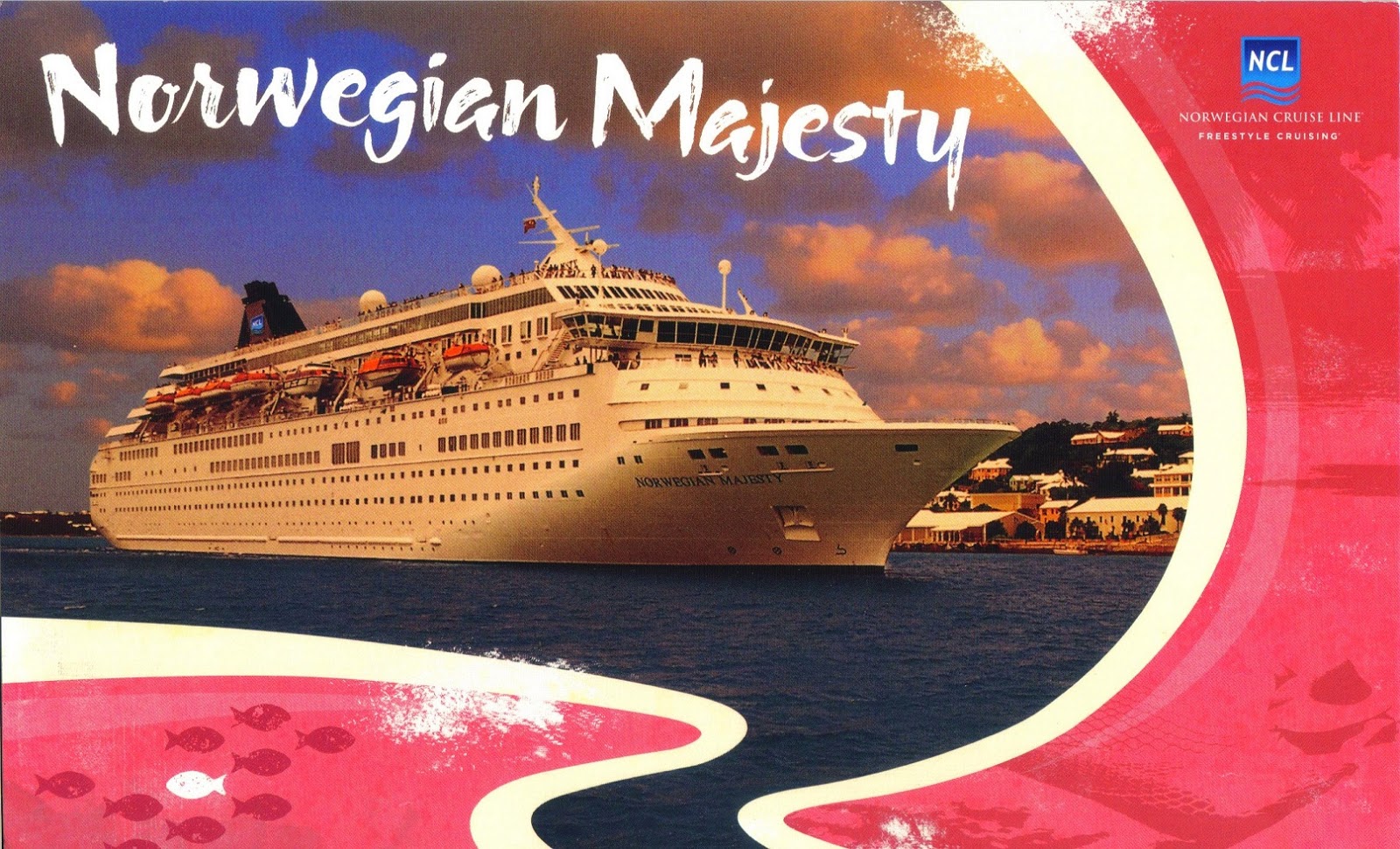 Below: The reverse side of the postcard depicted above: 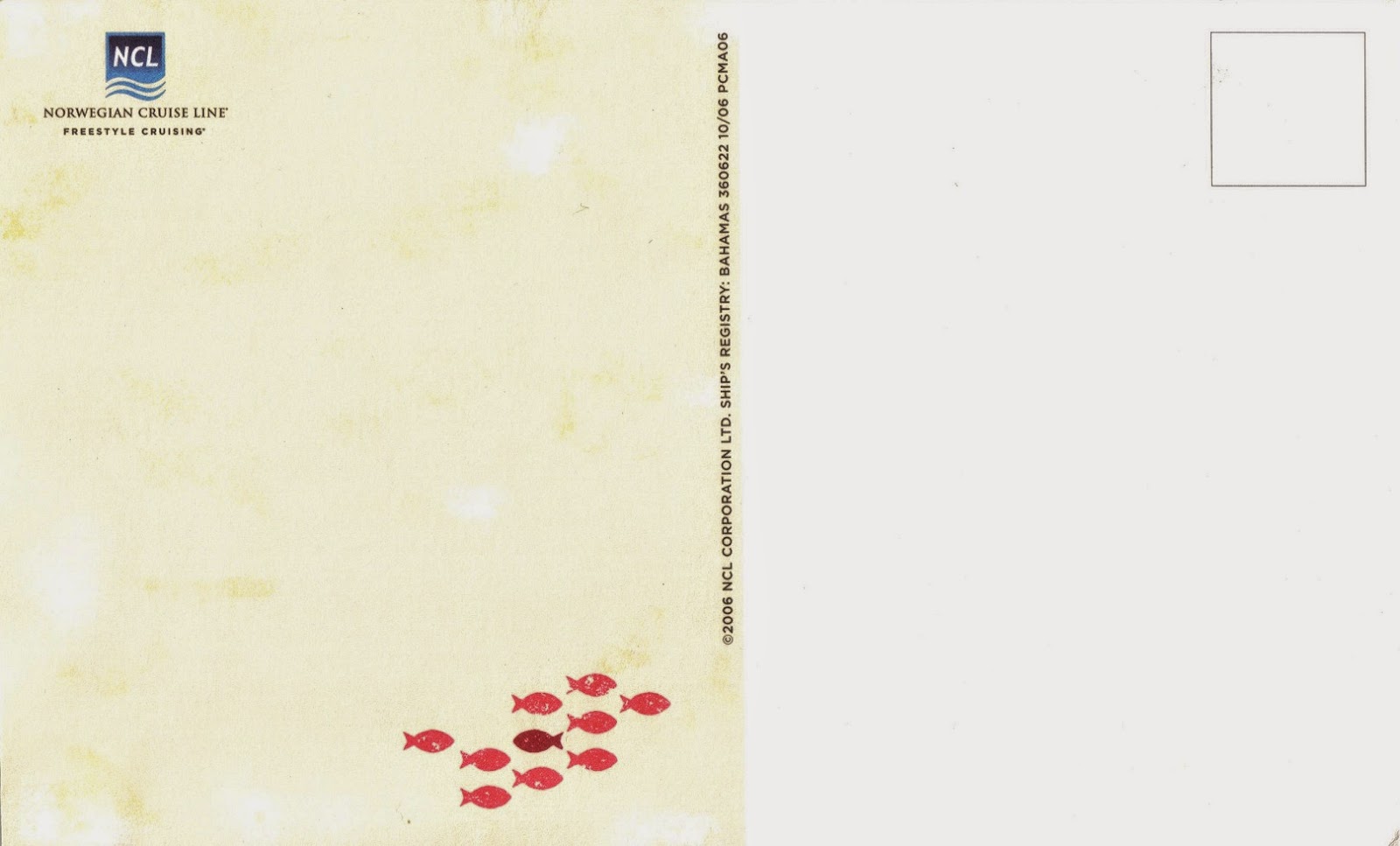 Below, mementos from a 12-day Grand Mediterranean cruise by MoMI contributor CP aboard Norwegian Cruise Line's (NCL) Norwegian Spirit in September 2016.  Originally built for Star Cruises and named SuperStar Leo, the vessel was the first of the two-ship Leo-class ships, being laid down by the Meyer Werft shipyard in Papenburg, Germany on 5 October 1996 and launched on 24 September 1998.  As she was originally designed for an Asian clientele, the ship is generally designed for shorter people and features shorter deck chairs and lower handrails and deck heads.  The ship was acquired by Norwegian Cruise Line in 2004, given a quick, two-week refit, and renamed Norwegian Spirit.  The 14-deck ship carries a crew of 920, with a passenger complement of 2,018 (based on double occupancy). 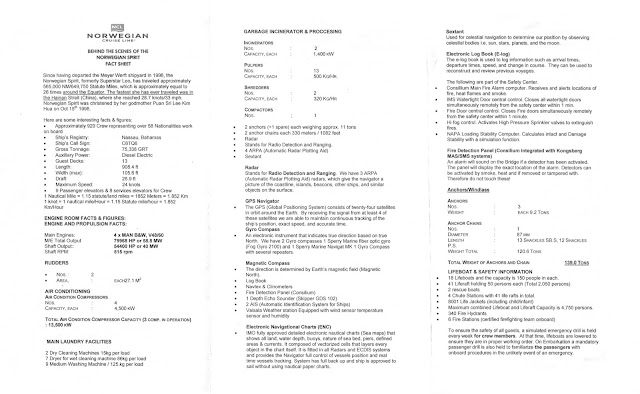 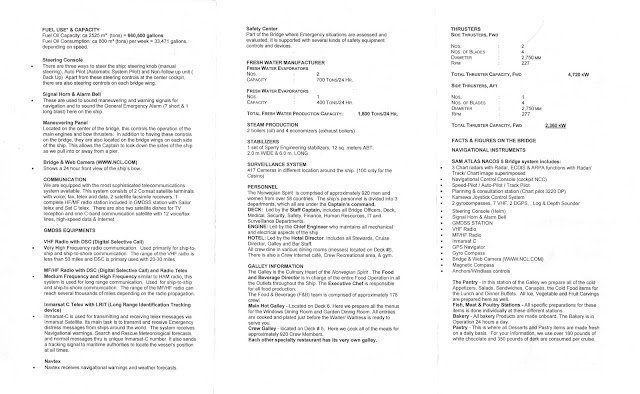 Below: The front and reverse sides of a Norwegian Spirit stateroom keycard.  The coding 'UBP-3UDP' refers to the beverage and dining options selected by the passengers in this stateroom; 'UBP' refers to the Ultimate Beverage Package and '3UDP' refers to the 3-Meal Specialty Dining Package (permitting three meals in the onboard specialty restaurants): 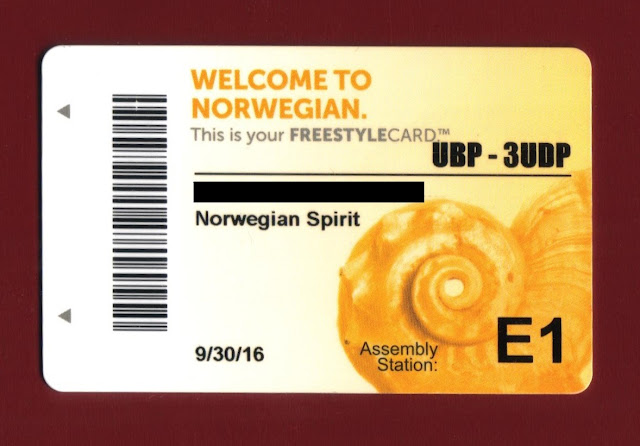 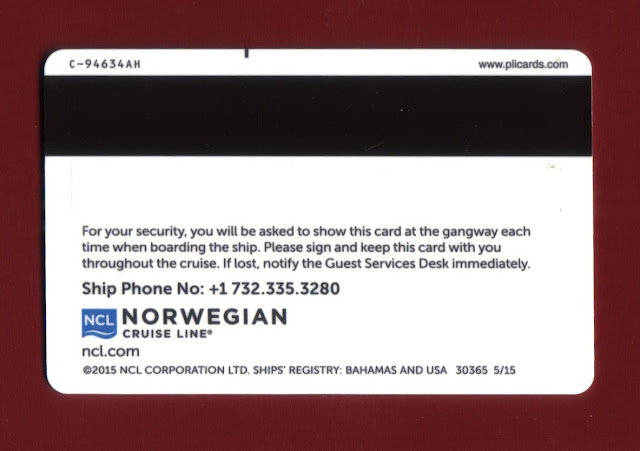 Below: A cocktail napkin from Norwegian Spirit: 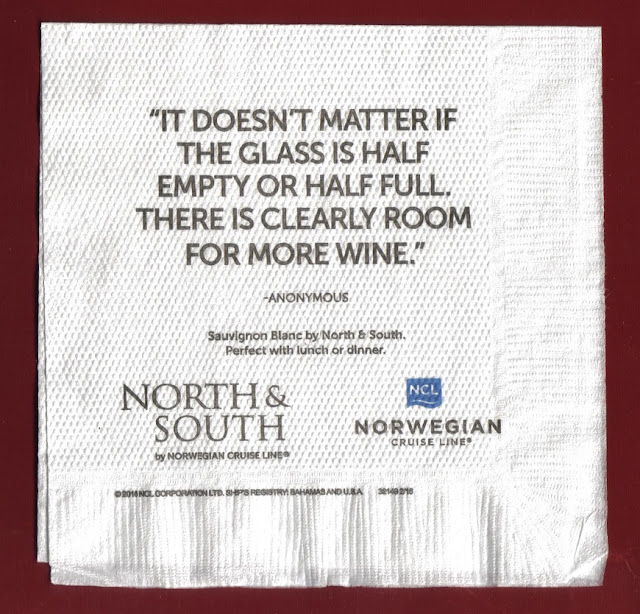 Below: Norwegian Spirit's daily newsletter, the Freestyle Daily from the cruise's 12th day, Thursday, 12 September 2016.  The Freestyle Daily provides passengers with a wide range of information on the port of call and the day's scheduled onboard programming and events: 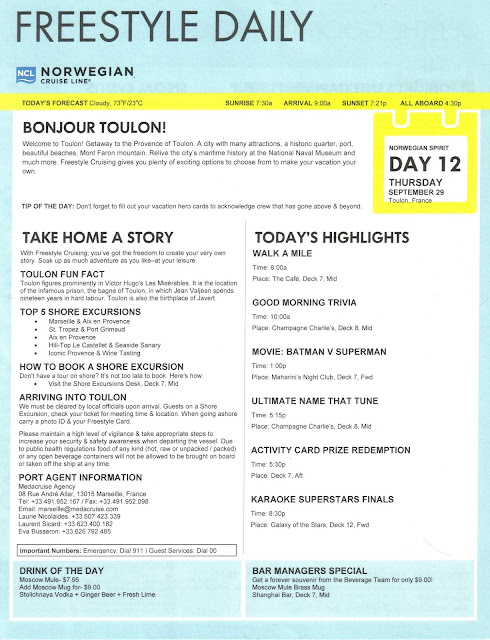 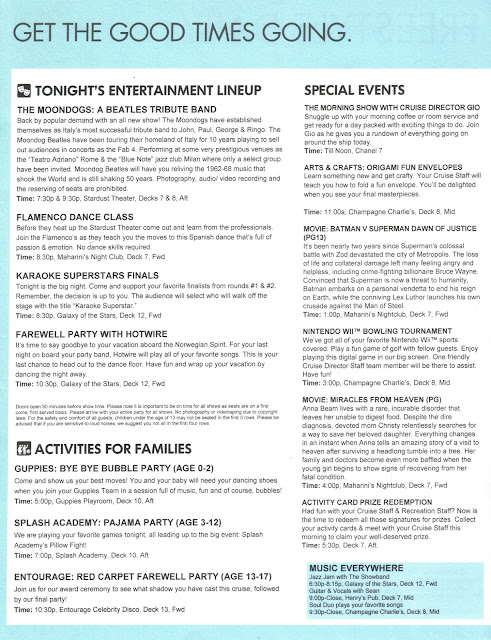 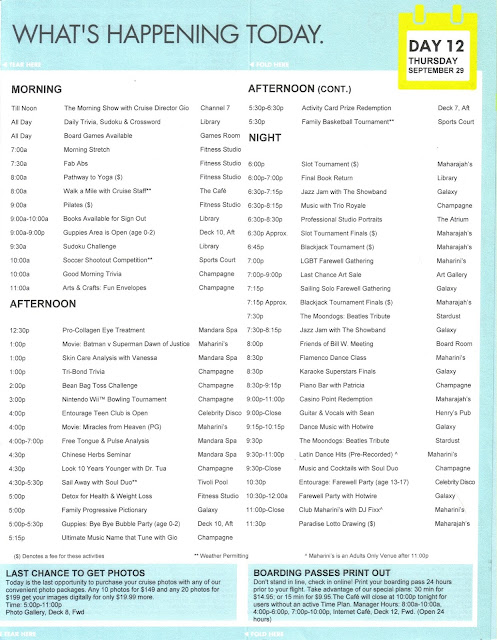 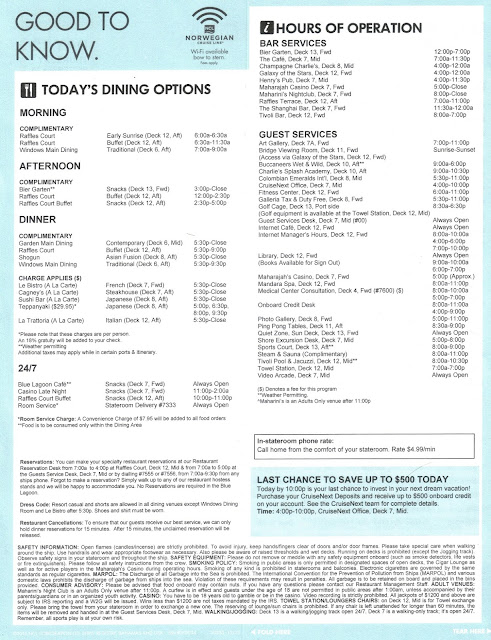 Below: A big part of modern-day cruising is marketing and, like all cruise lines, Norwegian advertises a wide variety of items and services not included in the fare, such as fashions, jewelry, fragrances, art, professional photography, wine tastings, spa treatments, specialty restaurants, and shore excursions.  The insert below was included in the 29 September 2016 edition of the Freestyle Daily: 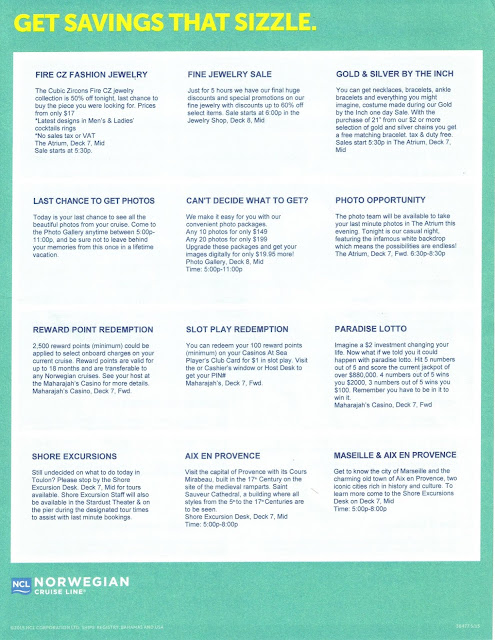 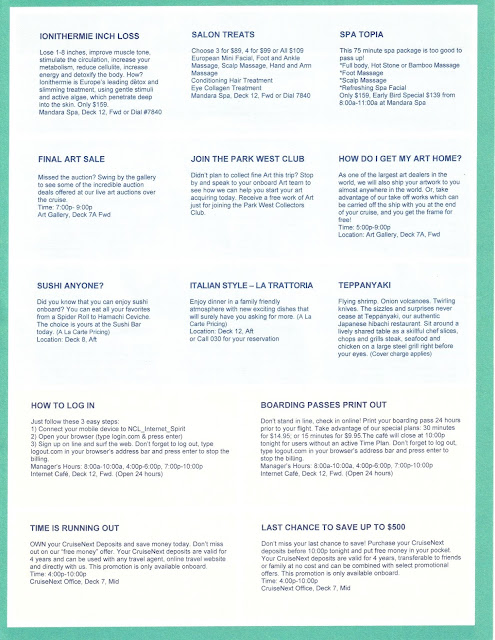 Posted by DS at 7:58 AM
Labels: Cruise Ships