Located a short ferry ride across the Solent from Portsmouth, UK, the Isle of Wight is best known for its quaint seaside resort towns, family-friendly attractions, temperate climate, and sailing regattas, as well as for Osborne, the idyllic private residence of Queen Victoria between 1846 and her death in 1901.


Although Queen Victoria and her husband Prince Albert of Saxe-Coburg and Gotha possessed three royal residences (Windsor Castle, Buckingham Palace, and the Royal Pavilion at Brighton), none of these were thought suitable for raising their young and growing family in the 1840s and 1850s.  Enamoured of the Isle of Wight's seaside privacy and tranquility, and able to journey from Windsor Castle or Buckingham Palace to the island in under four hours courtesy of the expanding British railway network, Victoria and Albert leased the Osborne estate of the Blachford family in 1844 and subsequently purchased the property outright in 1845 for £28,000 (over £3 million today).  With the original Osborne House (built 1774-81) unfit to house the Royal couple, their eventual nine children, and household staff, Prince Albert set about designing a new house, acting as architect and designer for the project, assisted by his old friend and artistic adviser Ludwig Gruner.   His design incorporated the latest construction techniques and fireproofing and Albert commissioned London-based builder Thomas Cubitt to demolish the original house and construct the new house in its place.   The new, multi-wing Osborne House was built between 1846 and 1851 in the style of a Renaissance Italian palazzo, as the temperate climate on the Isle of Wight and the sweeping views of the Solent reminded Albert of the Bay of Naples.  For the estate's gardens and landscaping, Albert personally oversaw every aspect of the design, favouring poplars, magnolias, rhododendrons, and azaleas, as well as evergreen-lined drives and walkways; he even personally planted a number of trees on the property.  The Royal Family's private apartments were housed in the Pavilion, the first wing to be completed in 1846, followed by the household wing in 1848, and the main wing in 1851.  In the years that followed, additional structures and amenities built on the sprawling property included gardens and walkways; a Swiss cottage, miniature fort, and museum for the royal children; a model farm to supply Osborne with fresh food; servants facilities; and stables for 50 horses and carriages.  In 1890-91, the Durbar wing was added to Osborne House, featuring a spectacularly ornate, Indian-themed dining room, reflecting Victoria's assumption of the title of Empress of India in 1877.

Queen Victoria and her family spent much time living at their beloved Osborne during more than 50 years.  By 1850, the family had established a regular pattern of visits to Osborne in March, May, part of July and August, and the period between late November and just before Christmas, after which time they would return to Windsor.  Although built as a secluded private residence, Osborne offered no respite to Victoria from her work as head of state, and she spent several hours most days reviewing official papers sent to her in government dispatch boxes, reading and writing letters and telegrams to government ministers, and hosting meetings of the Privy Council in Osborne House's Council Room.  Given the good rail, steamship, and telegraph connections between the Isle of Wight and London and the European continent, Osborne often played host to visiting Prime Ministers, foreign royalty, diplomats, and representatives of the British Empire.  A particularly noteworthy royal visit to Osborne was that hosted by Victoria for Emperor Napoleon III of France and his wife, Empress Eugénie, in August 1857, where the friendly and informal atmosphere of Osborne helped cement the alliance between the United Kingdom and France after the Crimean War.

On 22 January 1901, Victoria died in her bed in Osborne House, surrounded by members of her family, including her son and heir, Edward (soon to be crowned King Edward VII), and her eldest grandson, German Emperor Wilhelm II.   Although Victoria had left instructions in her will that Osborne was to be kept within the Saxe-Gotha family, Edward VII did not possess his mother's attachment to the property and chose to donate the estate to the nation in 1902.  Several of the house's rooms were thereafter opened to the public, with parts of the main and household wings being converted into a convalescent home for military officers, and some of the grounds used to accommodate the new Royal Naval College Osborne from 1903.  The Royal Naval College Osborne was closed in 1921 and, in 1955, Queen Elizabeth II granted permission for Victoria and Albert's private apartments in Osborne House to be opened to public display, having been previously converted into a museum accessible only by members of the Royal Family.  Taking over management of Osborne from the Department of the Environment in 1986, the English Heritage Trust launched an extensive program of restoration and redecoration, which was extended to include the whole house following the closure of the convalescent home in 2000.

Today, Osborne is a popular English Heritage tourist attraction, with the current estate encompassing 354 acres of the original property, which measured 2,000 acres at its largest in 1864.  Visitors can tour the royal residence, including the beautifully-restored private apartments of Victoria and Albert, the breath-taking Durbar Room, and several official rooms in the main and household wings; marvel at the house's Italianate terraced gardens; stroll through the 18th century brick-walled kitchen garden with its greenhouses, pergolas, and fruit trees; hike the kilometre from the house to the beach for calming views of the Solent, a treat from the seaside ice cream parlour, and a look at Victoria's modesty-preserving 'bathing machine'; and visit the royal children's Swiss cottage and garden plots.   A minibus runs between the house and the beach for elderly or handicapped visitors, and the gift shop in the former Petty Officers Quarters offers a range of Osborne-themed merchandise and souvenirs.

Without further ado, let's visit Osborne on the Isle of Wight...

Below: The guide provided to visitors, showing key points of interest and amenities on the Osborne estate. 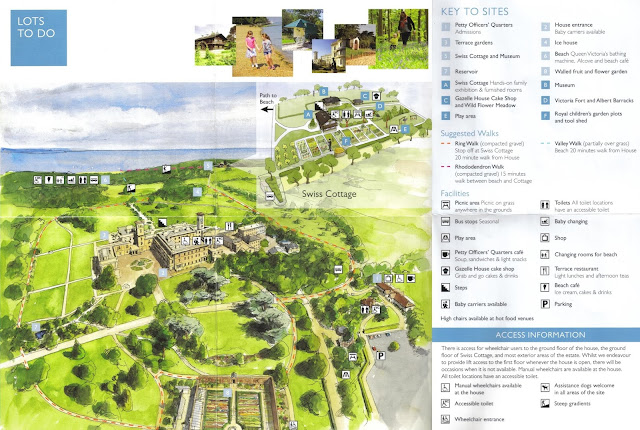 Below: An English Heritage 2019 promotional pamphlet for Osborne. 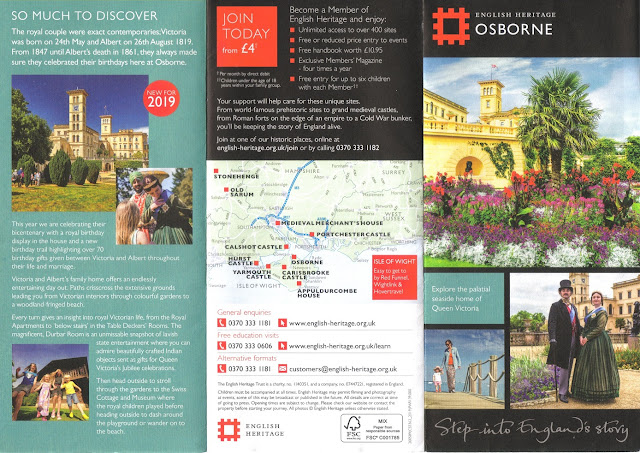 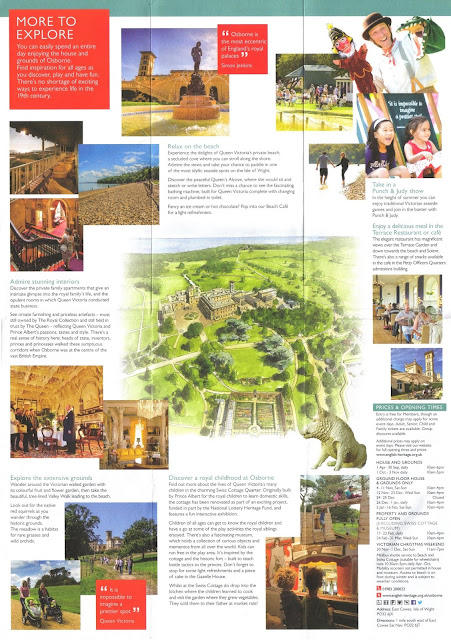 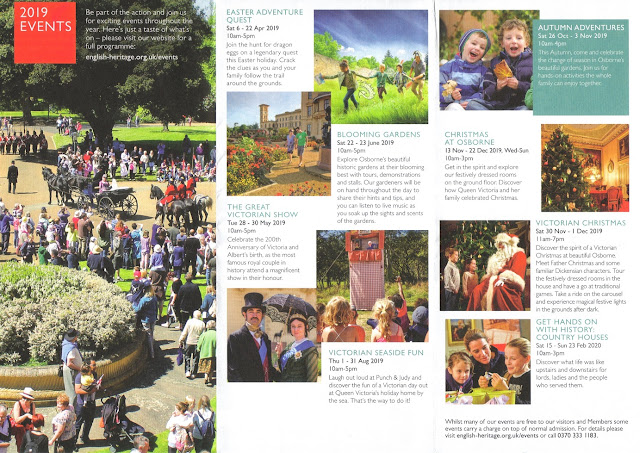 Below: The interpretive pamphlet for the special exhibit, 'Celebration: Victoria & Albert's Birthdays at Osborne'.  Victoria's first birthday at Osborne was her 29th, on 24 May 1848.  She was awakened by the Band of the Royal Marines playing under her window and, after dressing, went to look at her birthday gifts in company with Albert and their children.  Albert's birthday celebrations at Osborne usually included parties held in marquees on the grounds of the estate, to which all of Osborne's staff were invited.  The ritual of presenting tables piled high with gifts for Victoria or Albert on their birthdays contributed to a significant collection of art amassed by the Royal court, most especially during the 1840s and 1850s.  Although birthday tables continued to be presented to Victoria after Albert's death, they no longer served as a major part of family life as they had when he was alive. 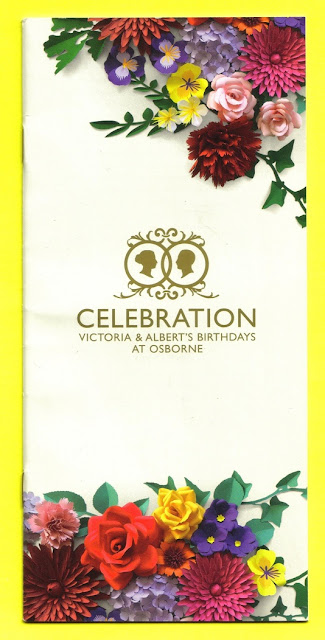 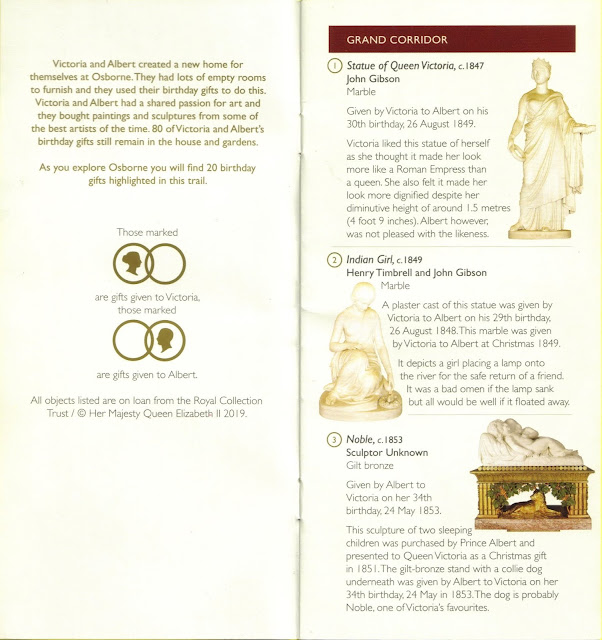 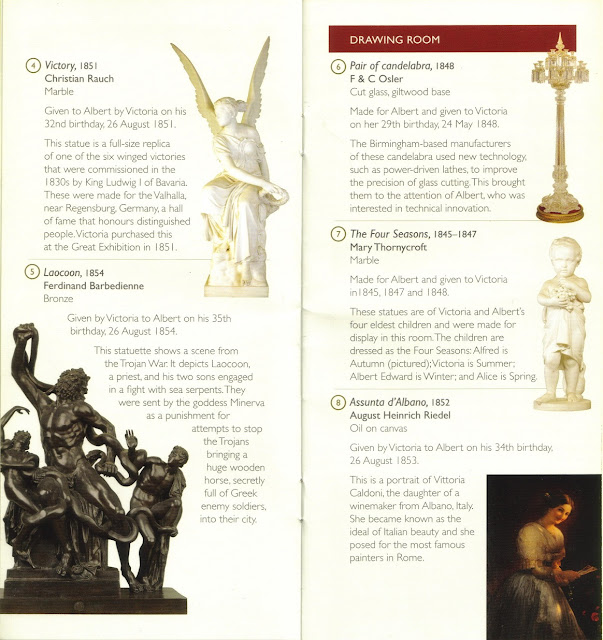 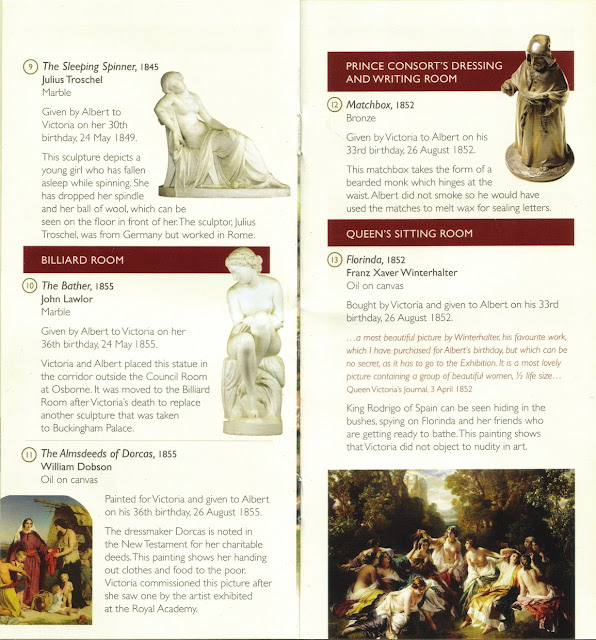 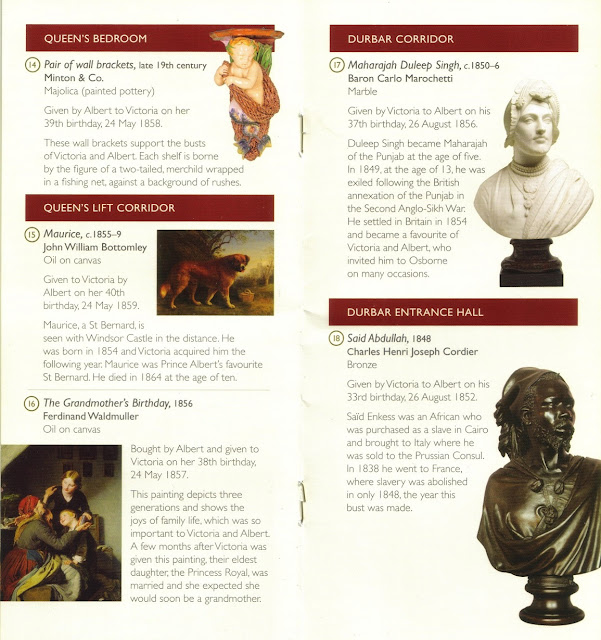 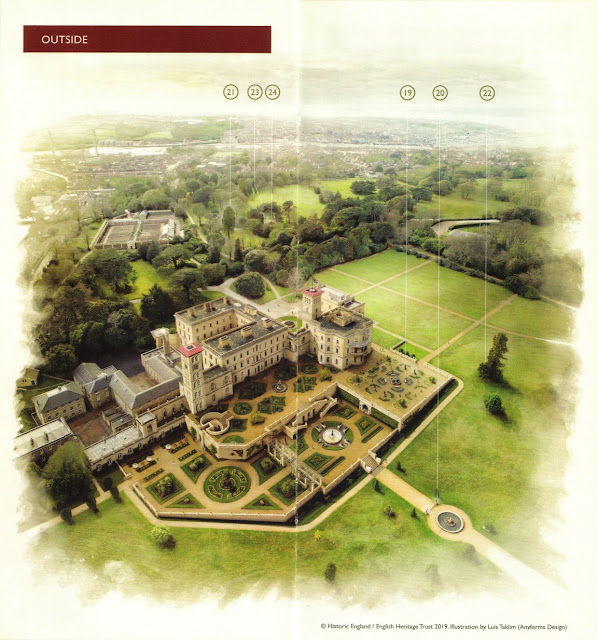 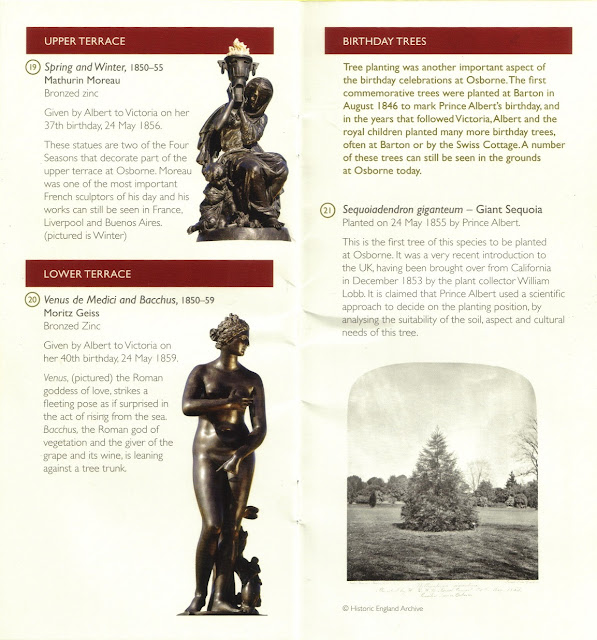 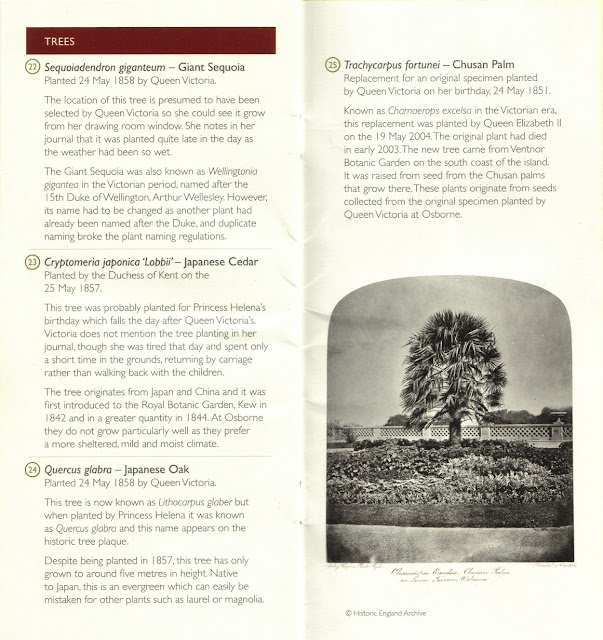