Holyrood Park sits next to Holyrood Palace, the British monarch's official residence in Scotland, and is a popular destination for hikers and nature-lovers. The park's 650 acres encompass hills, grassy plateaus, gorse-covered slopes, basalt cliffs, three small lakes, natural springs, forested areas, and even the ruins of an early-15th century stone chapel. Originally a royal deer-hunting estate dating to the 12th century, Holyrood Park was designated a royal park in 1541 by King James V, who had it enclosed within a stone wall.  At the centre of the park is Arthur's Seat, the 250.5 metre (821.85 foot) tall peak that is the highest point in Edinburgh and an extinct remnant of several volcanoes that once dotted the Edinburgh region more than 335 million years ago. Evidence of Iron Age hill forts and man-made agricultural terraces likely built by the Votadini tribe in the 1st century AD can be found on and around Arthur's Seat, whose name is thought to derive from the legends of King Arthur.  Numerous footpaths and hiking trails crisscross Holyrood Park, with thousands of visitors climbing to the top of Arthur's Seat to enjoy the stunning, panoramic views of Edinburgh and the Firth of Forth.  Managed by Historic Scotland and maintained as much as possible in its natural state, Holyrood Park features minimal signage and safety barriers.

Below: The front and reverse sides of a free pamphlet available to hikers in Holyrood Park. 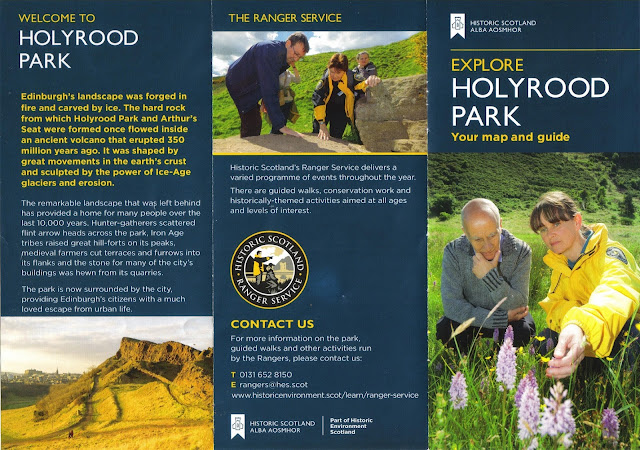 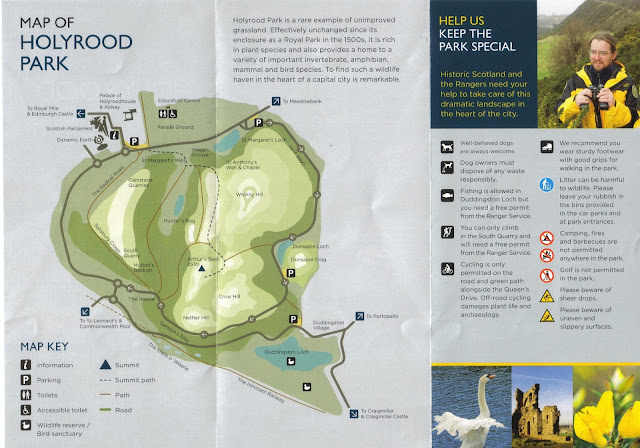