Given MoMI's last visit to HMS Belfast, the Second World War Royal Navy cruiser turned museum ship, was in August 2009, we decided it was time to go back and see what was new, what had changed, and how the ship looked after eight years, eight months, and four days.  If you wish to compare these 2018 photos to those taken in 2009, check out Travel and Tourism Gallery 3 - HMS Belfast at http://momi-canada.blogspot.com/search/label/Travel%20and%20Tourism%20Gallery%203%20-%20HMS%20Belfast

Built by the Harland & Wolff Shipyard in Belfast, Northern Ireland between December 1936 and August 1939, HMS Belfast was one of ten Town-class light cruisers commissioned into the Royal Navy between 1937 and 1939.  She was commissioned on 5 August 1939, just prior to the outbreak of the Second World War, and was soon participating in the naval blockade of Nazi Germany.  However, on 21 November, Belfast struck a German magnetic mine while sailing out of the Firth of Forth, the explosion warping the ship's keel and causing extensive damage that required two years of repair work.  With her damage repaired and now sporting improved firepower, radar, and armour, HMS Belfast re-entered service in November 1942 and saw action escorting Arctic convoys to the Soviet Union throughout 1943.  In December 1943, Belfast assisted in the sinking of the German battlecruiser Scharnhorst during the Battle of North Cape.  In June 1944, Belfast supported the Allied landings in Normandy (Operation Overlord) and, in June 1945, was sent to join the British Pacific Fleet in the war against Japan, arriving in the Far East shortly before the end of hostilities.  In the post-war period, HMS Belfast participated in naval combat operations in 1950-1952 during the Korean War and underwent an extensive modernisation between 1956 and 1959.  In 1963, HMS Belfast was decommissioned and placed in reserve, after which efforts to preserve her eventually led to her conversion into a museum ship in the Pool of London, opening to the public on Trafalgar Day (21 October) 1971.  Transferred to the Imperial War Museum in 1978, HMS Belfast has become a popular tourist attraction, garnering over 250,000 visits per year and supported financially through a combination of admissions revenue, commercial activities, and funding from the UK Department of Culture, Media and Sport.

Below: The front and reverse sides of the HMS Belfast visitor guide provided with payment of admission. 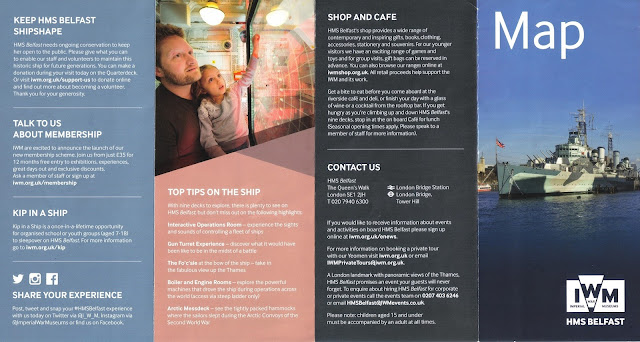 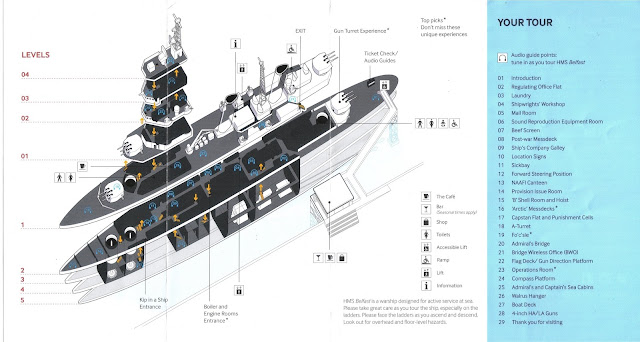